Back in May I received an email from a colleague about a 3 day training event for early-career climate scientists on ‘Improving Science-based Climate Policy for Flood Risk Management’, organised by the UCL Policy Commission on Communicating Climate Science.

The aim of the event was to:

• Explore the process of co-production and iterative dialogue between climate scientists and those charged with reducing flood risks.

Sounded very relevant to my role on LANDWISE and not being one to pass up on an opportunity to network and hopefully learn some new skills, I promptly sent off an application.

Having had my place accepted, along with 6 other early-career scientists (ECS) from around the UK, I received a phone call about 1 week before the retreat from Andrew Jackson at Pro-Real. Andrew wanted to find out a bit more about my work in flood risk research, but also my experience engaging with policy-makers (which up until this point had been fairly limited, although I had run a focus group with the Environment Agency on the application of seasonal hydrological forecasts in the West Thames). Andrew informed me that over the 3 days of training, I would learn a host of new skills which would be put to excellent use as I would be expected to co-produce an engagement activity with the other ECS’s. This activity would be tested on 15-20 decision/policy-makers from business, environmental organisations, and local and national government at a networking event for climate scientists and policy-makers at UCL on 9th July.

I must admit I was a bit sceptical about the residential retreat itself (4th – 6th June). I’m sure many of us have been to courses or training events that haven’t really enriched our learning or experiences. However, this training programme was fantastic – engaging, interactive, thought-provoking and I learnt a lot with respect to human psychology and how to communicate with different groups and people. A real example of what can happen when you put 3 people together from different backgrounds who share a common interest – notably a neuroscientist (Dr Kris De Meyer from Kings College London), a Professor of climate science (Prof. Chris Rapley from UCL) and a communications expert (Andrew Jackson, Pro-Real). Plus I should mention that Cumberland Lodge (Windsor Great Park) is a beautiful location which always helps!

A summary of some of my learning highlights include:

“String-Theory” at the policy-makers event

In the weeks that followed between the retreat and the event on the 9th July we had a number of conference calls where we worked on improving our policy-science engagement activity.

Our activity (which was tested out and refined by many helpful colleagues at Reading University) was called ‘String Theory’ – the aim was to identify what matters most to policy-makers during a flood event and to discuss who is responsible for managing the impacts.

It went down pretty well on the evening – if you can imagine 20 people with A4 multi-coloured cards hung round their neck connected to each other by hundreds of meters of string! Importantly, our activity evoked a lot of discussion (and in some cases disagreement) between policy-makers and scientists alike…

“The connections are very complex … what is the significance of the private sector with respect to national resilience?”

I don’t think we reached any conclusive answers, but what we did achieve was new discussion, new viewpoints and new networks for the future… Oh and String Theory may also make a guest appearance at the LANDWISE Annual Conference in November – watch this space! 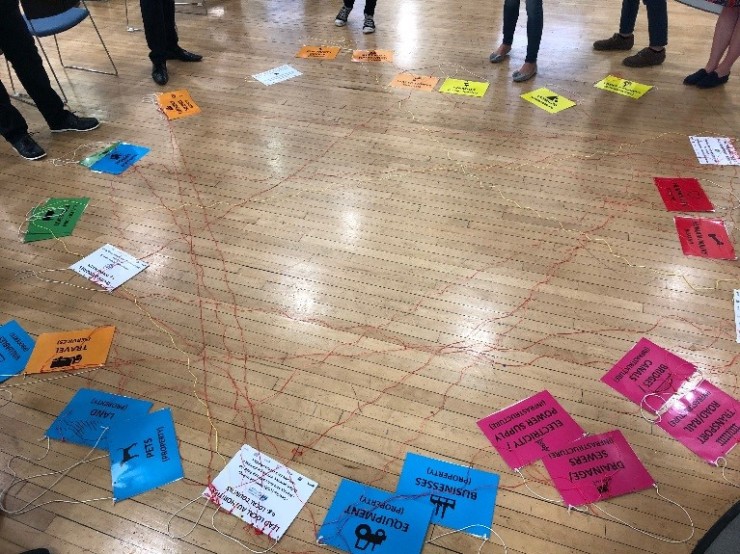